stuff from all over

The big guy should be busy sketching and signing at Megacon this weekend. No word yet on his other convention appearances so far. I know he was hoping to get to the Emerald City Comicon in Seattle among others and I'll try to get some updates as soon as I can.

The folks at Twomorrows have a Modern Masters volume in the pipeline on Darwyn. 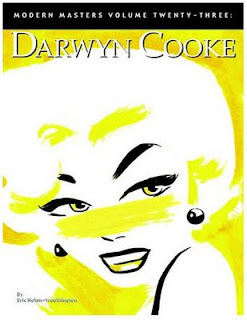 and get to your local comic book shop next week! The new issues of Jersey Gods and Madman are due out. Darwyn did the cover for the Jersey Gods and collaborated with J. Bone on a story in the Madman issue. Face front, true believer, and merry marvel march your way to the sales counter with those comics clenched in your fists.

and the folks at Read Yourself Raw have a pretty good bio of the Cooke-ee Monster here.

That's it for now - remember to send in a post card for some sweet swag! Posters, comics, and more!
Posted by Calum Johnston at 12:24 PM

I just preordered that Modern Masters at Amazon :) SO can't wait.

I can't wait for this to come out!