I was cleaning up my office in the dank hole called the Strange Adventures comic shop and uncovered some neat things. I have a copy of Red Menace #1, the variant cover by Darwyn and he signed it for me as I meant to use it for a giveaway, put it away for safekeeping and promptly forgot about it.... 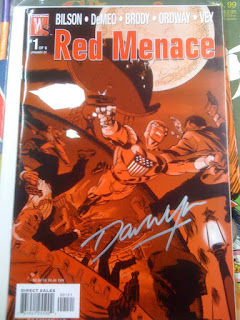 and I also have some New Frontier posters, some of the promotional ones and the one based on the cover for one of the collected editions.... 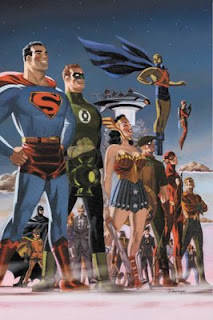 so for all the folks who can't make it to Megacon (Florida from Feb. 27th to March 1st) to see Darwyn in person, here's a chance to get some swag. Just send a postcard through the old-fashioned mail system with your name and address and I'll draw a winner for some Darwyn Cooke stuff! Who knows what else may be added to the pile by the time I'm done cleaning up! The draw will take place on Friday morning, March 27th and I'll post the winner's name on the blog that day and I'll ship the box of goodies right to your door wherever in the world you live. All for the price of a stamp and a postcard! What a deal!


So, as mentioned above, Darwyn will be attending the Megacon Comic Convention in Orlando. He hasn't confirmed any other appearances so far, but I'll do my best to keep you apprised.

...and to Joseph - I sent an e-mail to James Sime, proprietor of the very fine Isotope Comic Book Lounge, but have yet to hear back regarding the New Frontier prints they had made up for the screening of the movie. I would imagine they are long gone, but feel free to check with Isotope yourself.

...and one more thing...I don't know if anyone has been to Santa's Village in their youth; it's a charming tourist trap in New Hampshire and I went there with my brother and sister way back when we were little kids. My wife, whom I met in 1994, had also been there as a child and we found we had similar photos showing our respective siblings in the same photo spot, the smiling whale. I thought it was kind of cute to imagine that maybe we were there on the same day and wrote a little strip about it that Darwyn was kind enough to illustrate. (I know this is corny, but, hey - tomorrow's Valentine's Day and you should all be thinking of your sweethearts!) 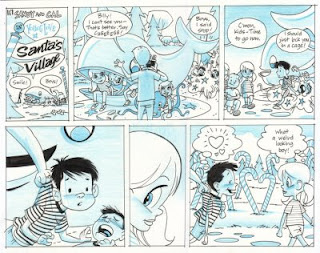 Posted by Calum Johnston at 6:59 PM

Thanks a lot Calum. Fingers crossed the Isotope guys have one rolled up in a corner somewhere :/ Exciting contest- I told my fellow Connecticut Cooke fans but made them promise to subscribe to your Blog here if they're sending in entries! Thanks for all you do here.