new this week: The Fox #1 cover 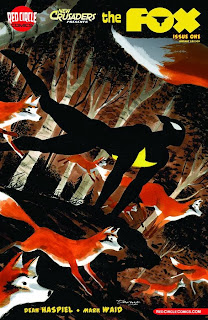 out this week wherever comic books are sold is the first issue of Archie Comics / Red Circle Comics' new action-adventure series, The Fox! Here's the solicitation info:


FOX #1 "RUNNING WITH THE FOXES" cover by Darwyn Cooke

NEW RED CIRCLE SERIES! From the world of the New Crusaders, comes the FANTASTIC debut of the high-flying FOX! Emmy Award winning writer/artist Dean Haspiel (Billy Dogma, HBO's Bored to Death) and Eisner Award winning writer Mark Waid (Daredevil, Thrillbent) bring the legendary, pulp-style hero The Fox to life in "Freak Magnet, Part One: The True Face of MyFace"! When photojournalist Paul Patton, Jr. donned a super hero costume, he thought it would be a quick way to make some news-now the strange and unusual just can't help but be drawn to the freak-magnetism of the fabulous fighting FOX! While working on a puff-piece at the Red Circle Gazette, an evil truth about social media mogul Lucy Fur is discovered, bringing Paul face-to-face with a criminal kingpin! Get in on the ground floor with the hottest new fall series featuring art and story from the biggest names in comics today!

There are also covers by Fiona Staples as well as Dean Haspiel .

In one of the last panels of the New York Comic Con, Paul Levitz sat down with Darwyn and Jules Feiffer to talk about Graphic Noir. Darwyn's new Parker adaptation “Slayground” comes and Jules Feiffer has a new graphic novel, “Kill Your Mother”, coming out next summer.

Article on Comic Book Resources in this link.

Posted by Calum Johnston at 8:05 PM No comments: