some Dutch Courage coming up in Chicago area 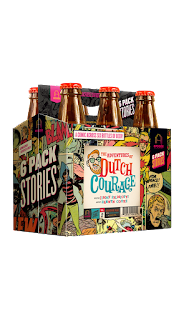 The Arcade Brewery has the Adventures of Dutch Courage coming out now in Chicago area beer stores. It is the second volume of their 6-Pack Stories: a special release beer inspired by the 6-panel comic on the bottles!

Arcade describes this year's beer as "enjoyable and unique as Dutch Courage. With subtle hints of juniper berries and lemon peel, this refreshing beer pairs perfectly with a comic full of twists and turns!"

for more info, check with Arcade Brewery or their facebook page where they recently announced:

"6-Pack Stories Packaging day! What an absolutely awesome beer with a nice bitter bite and hints of juniper and lemon peel. The complexity and depth of this session ale (4.6% ABV) is outstanding. Hitting shelves 11.18.15 - 6PM at The Beer Temple, Capones Liquor, Prestige Liquors and Binny's (Lincoln Park)."
Posted by Calum Johnston at 3:39 PM 1 comment: 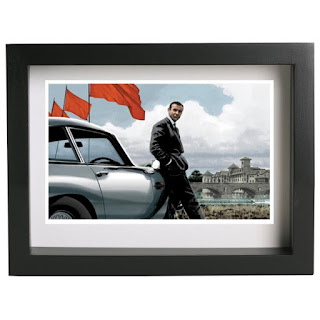 It looks like the Lakes Festival still have a few of the James Bond giclee prints available on their website here.

Posted by Calum Johnston at 2:12 PM No comments: 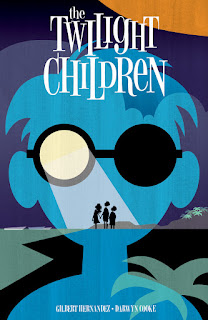 Exciting times over here at the Cooke household. Darwyn is just back from Cincinnati and Baltimore and is now headed to New York for The Twilight Children launch!

His schedule for NYCC is as follows

He does not have a table in artist alley and is not sketching or taking commissions. If additional signings are added or he shares space with someone I will update as soon as I know. 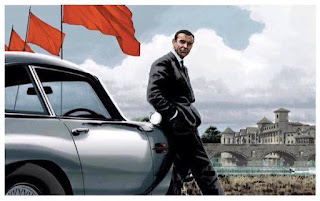 Our next confirmed show is The Lakes Comic Art Festival October 16-18 in Kendal, England with a huge group of Canadians (thanks TCAF!). From there we are heading to Gosh! in London for a signing and talk Wednesday October 21. This is our first trip to the UK and we are both pretty excited.

Next week is a big one with both The Twilight Children debut AND Graphic Ink - The Art of Darwyn Cooke in stores. Both should be available at finer comic stores everywhere. 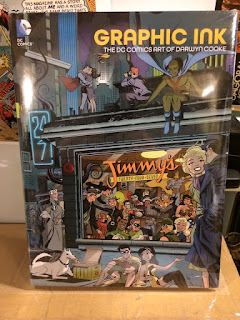 Arriving in your local comic store or book shop the same week as the first issue of Twilight Children (Oct. 14, 2015) is the Graphic Ink hardcover that collects 400+ pages dating back to 1985's NEW TALENT SHOWCASE #19, and stories from BATMAN: GOTHAM KNIGHTS, LEGION WORLDS, JSA ALL STARS, JONAH HEX and more, plus dozens of covers!
Posted by Calum Johnston at 1:37 AM 2 comments:

You can imagine Tweety saying, "I tawt I taw a puddy-tat!" 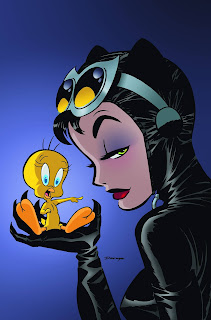 Coming to your local comic shop in mid-November, CATWOMAN #46 LOONEY TUNES VARIANT EDITION. Contact your local shop to reserve a copy. These are available to retailers without any qualifiers or incentives; just let them know you'd like to get a copy!

DC is putting out several Looney Tunes / DC variant covers throughout the month of November.

More info on the rest of the Looney Tunes covers can be found at PreviewsWorld:

Next up, Darwyn will be at Cincinnati Comic Expo from September 18th through the 20th. Info right here.

Darwyn will be a guest at the Lakes International Comic Art Festival is October 16th - 18th, 2015 in Kendal, Cumbria, England. Info here and here. 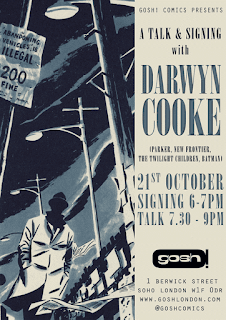 Gosh Comics in London will be hosting a signing from 6-7pm and Darwyn be giving a talk at 7.30 – 9pm on Wednesday the 21st of October. There's also a facebook event page here.

We'll post updates as soon as they're confirmed!
Posted by Calum Johnston at 2:17 PM 4 comments:

Twilight Children by Gilbert Hernandez and Darwyn coming this October

A new mini-series written by Gilbert Hernandez and illustrated by Darwyn has been announced at the San Diego Comic-con according to comic book resources.

Entertainment Weekly was able to get some info on the series from Gilbert here.
Posted by Calum Johnston at 10:45 PM 3 comments:

HitFix Harpy has an exclusive look at the all-new Lee Bermejo and Darwyn Cooke action figure lines that are on display at the DC booth on the Comic-Con show floor.

To quote HitFix:
"Each figure is inspired by the intricate art styles of their respective artist and the art design is taken straight from the pages of DC’s comics.
Each of the Darwyn Cooke action figures have 11 points of articulation while the Lee Bermejo models come with 21 points of articulation (save for Lex Luthor, who only has 15.) All of them are made from high quality PVC and are priced at an MSRP of $25 a piece."
Batman! Adam Strange! Harley Quinn! and a terrific Supergirl that includes Krypto and Streaky!

check them out here

and it looks like they are scheduled to arrive in stores in June of 2016  according to this photo on instagram
Posted by Calum Johnston at 1:51 PM 2 comments:

The folks at Humble Bundle have a great deal on a stack of digital books that includes Darwyn's Parker adaptations! It's only on for a few more days at this link.

You get these books for a donation of any amount:

For a donation of $15 you get two more Parker books, The Outfit and The Score and a stack of other fine graphic novels! 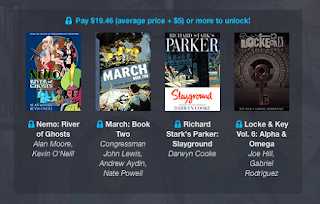 and for $20 or so, you get The Slayground and the second volume of March, the final volume of Locke & Key and Nemo: River of Ghosts!

A great deal with funds going to various charities. If you're looking for some stuff to read at the beach or on a road trip; this humble bundle will fill up your iPad or whatever your reading device is with some damn fine comic book goodness!
Posted by Calum Johnston at 5:24 PM No comments:

Video of the Spotlight on Darwyn Cooke Panel from WonderCon 2015

Featuring a reunion of the original iFanboy founders and co-hosts: Ron Richards, Josh Flanagan, and Conor Kilpatrick; it looks like they had a blast talking with Darwyn at WonderCon last week in a conversation that spanned everything from his earliest days trying to break into comics through to his first creator owned work Revengeance, which is coming later this year from Image Comics.

Check out the video here.

Posted by Calum Johnston at 10:23 PM No comments:

If you're here, you are probably familiar with Darwyn's epic New Frontier series, If not, scroll further down for the sales pitch part.

All the bells and whistles of the Absolute Edition of The New Frontier are collected into a more affordable, but still deluxe, hardcover and this version also includes the fantastic New Frontier Special one-shot featuring art and stories by Darwyn, Michael Cho, J. Bone and more! 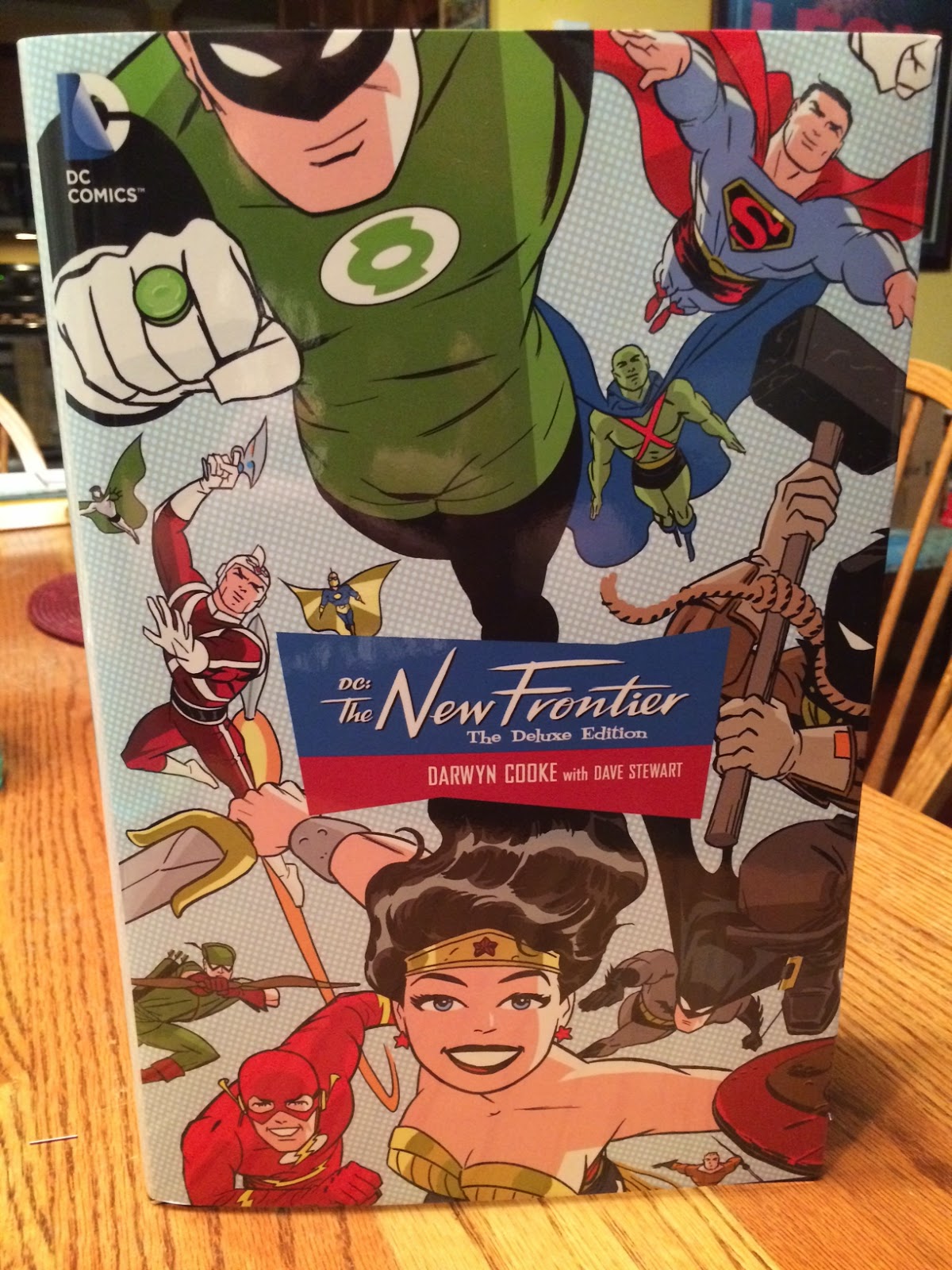 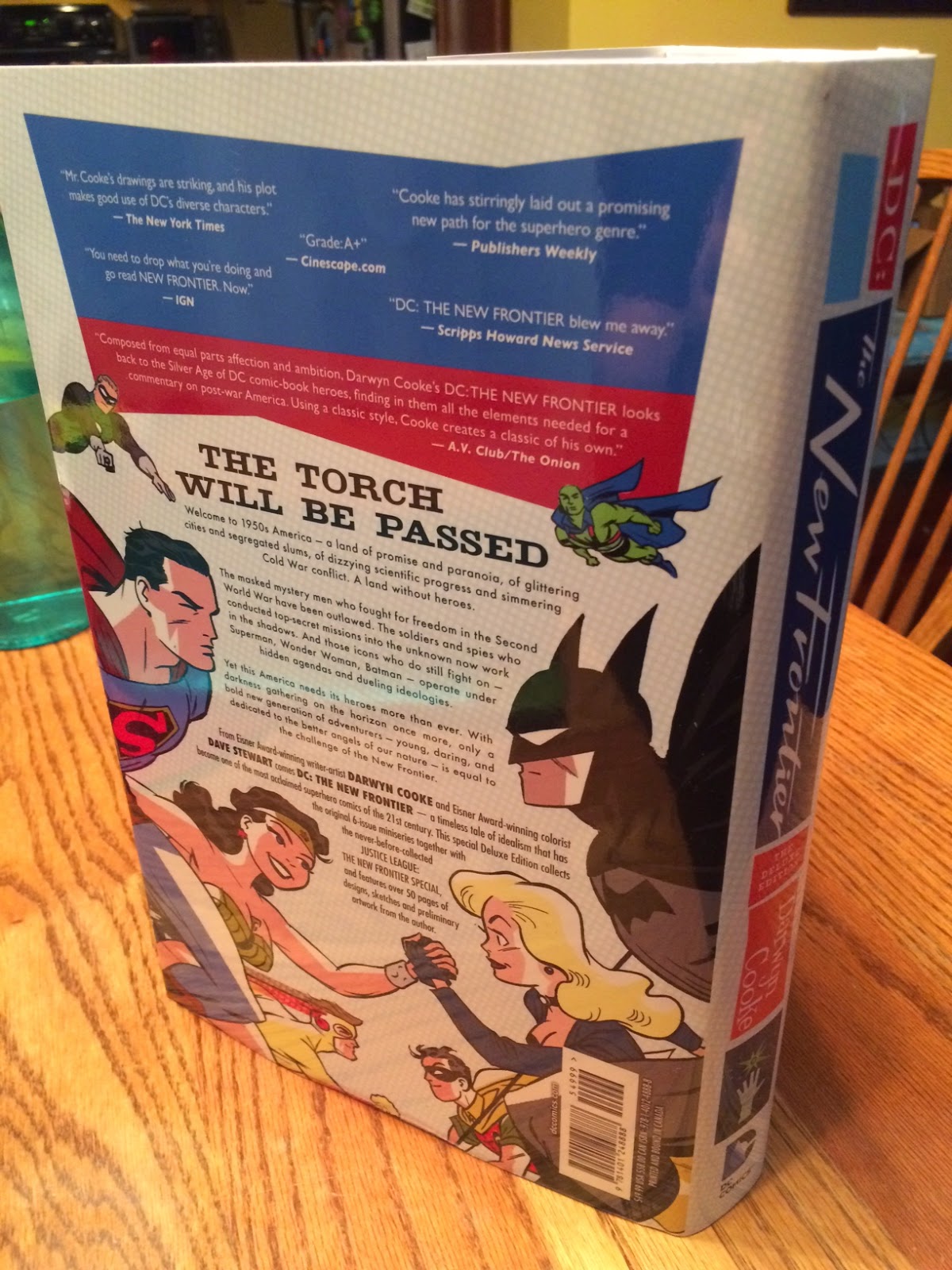 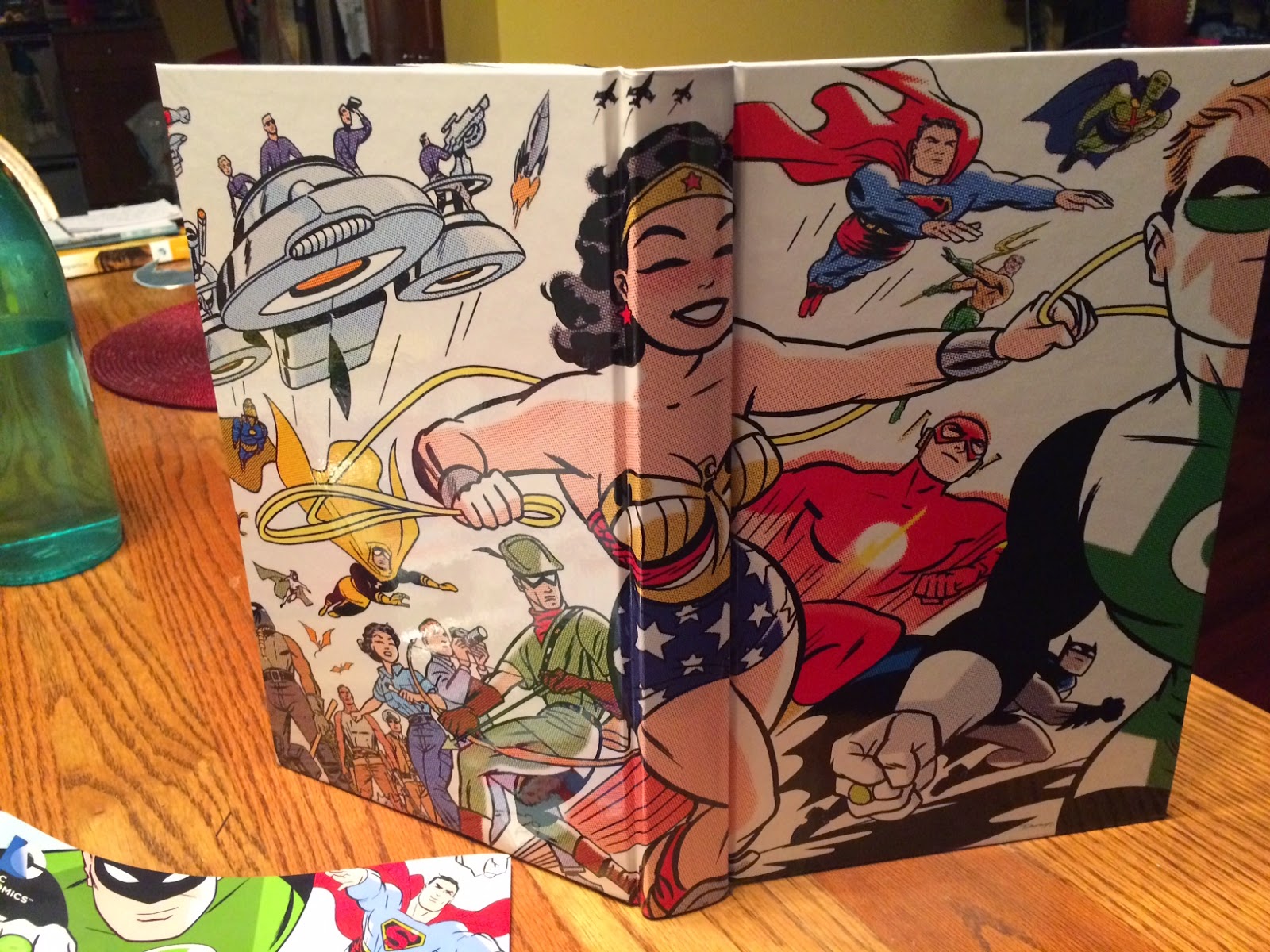 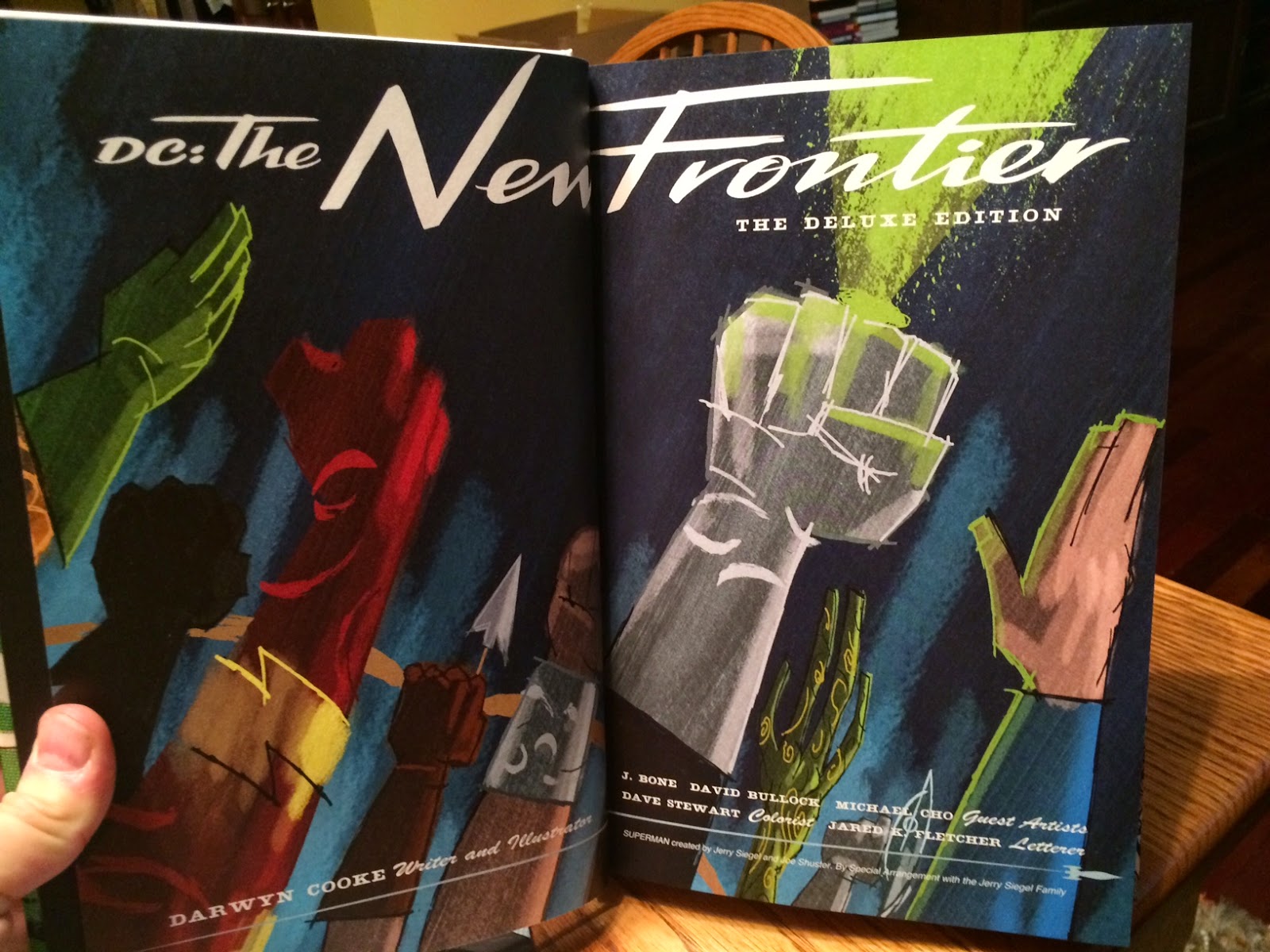 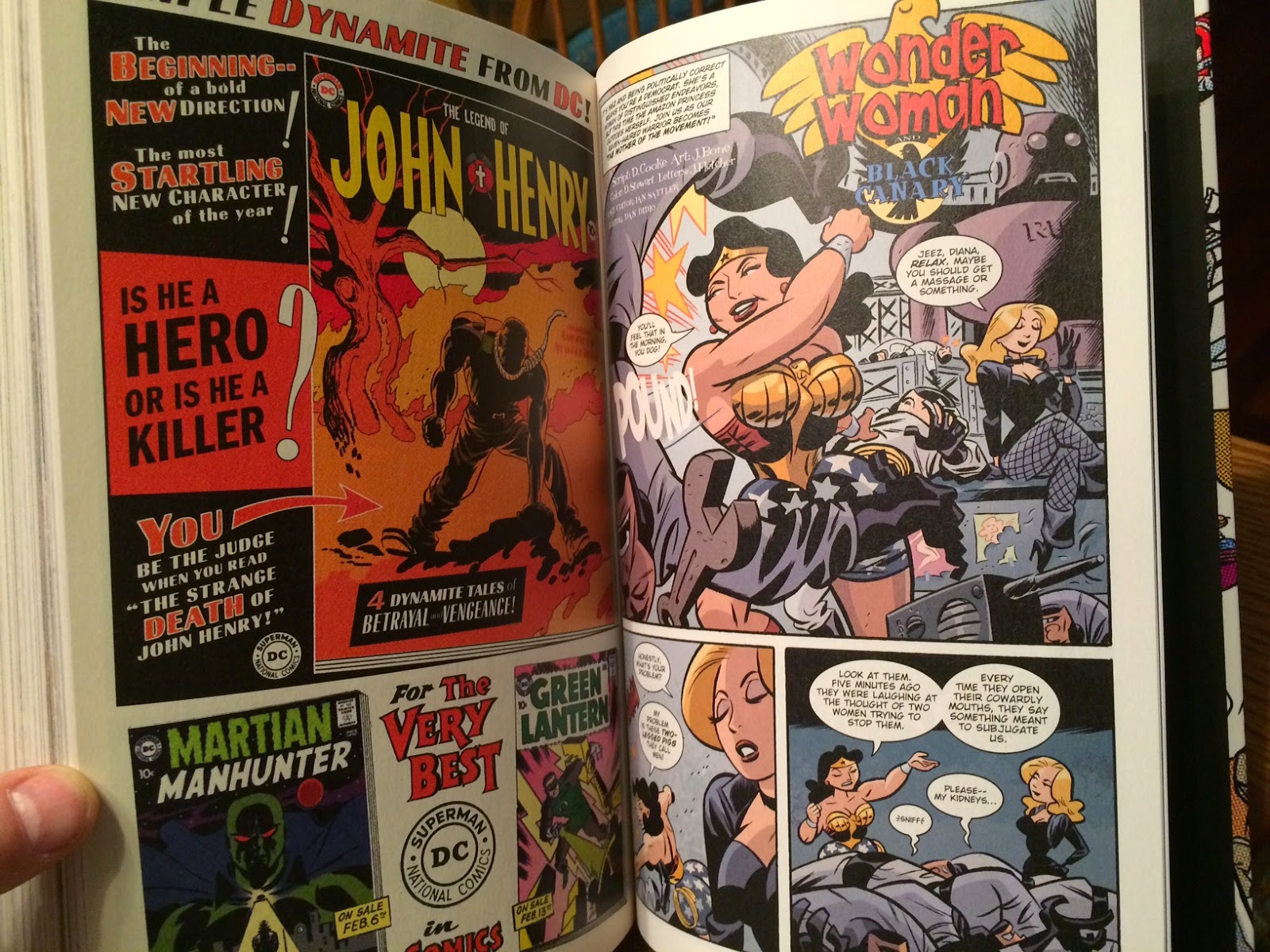 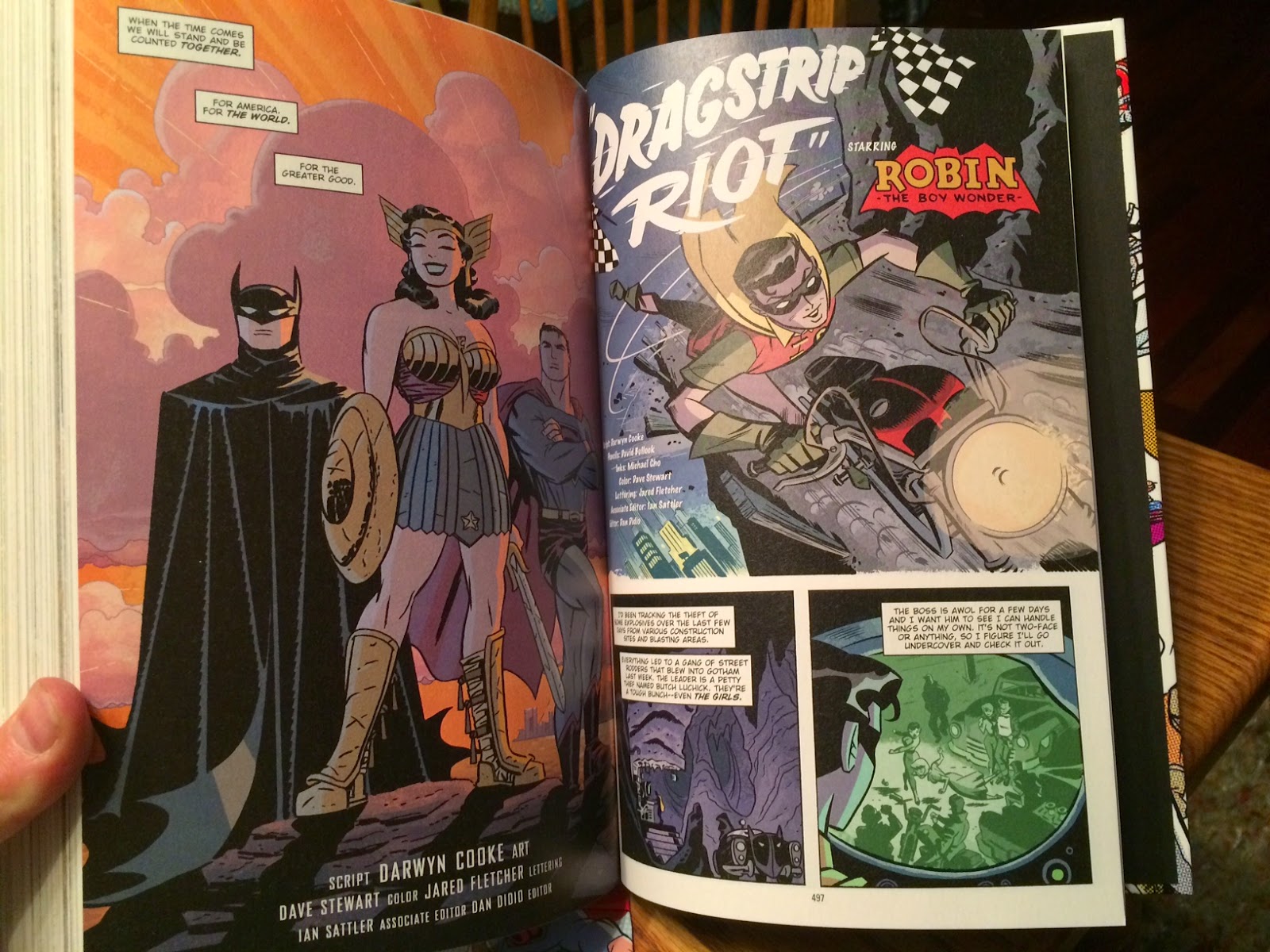 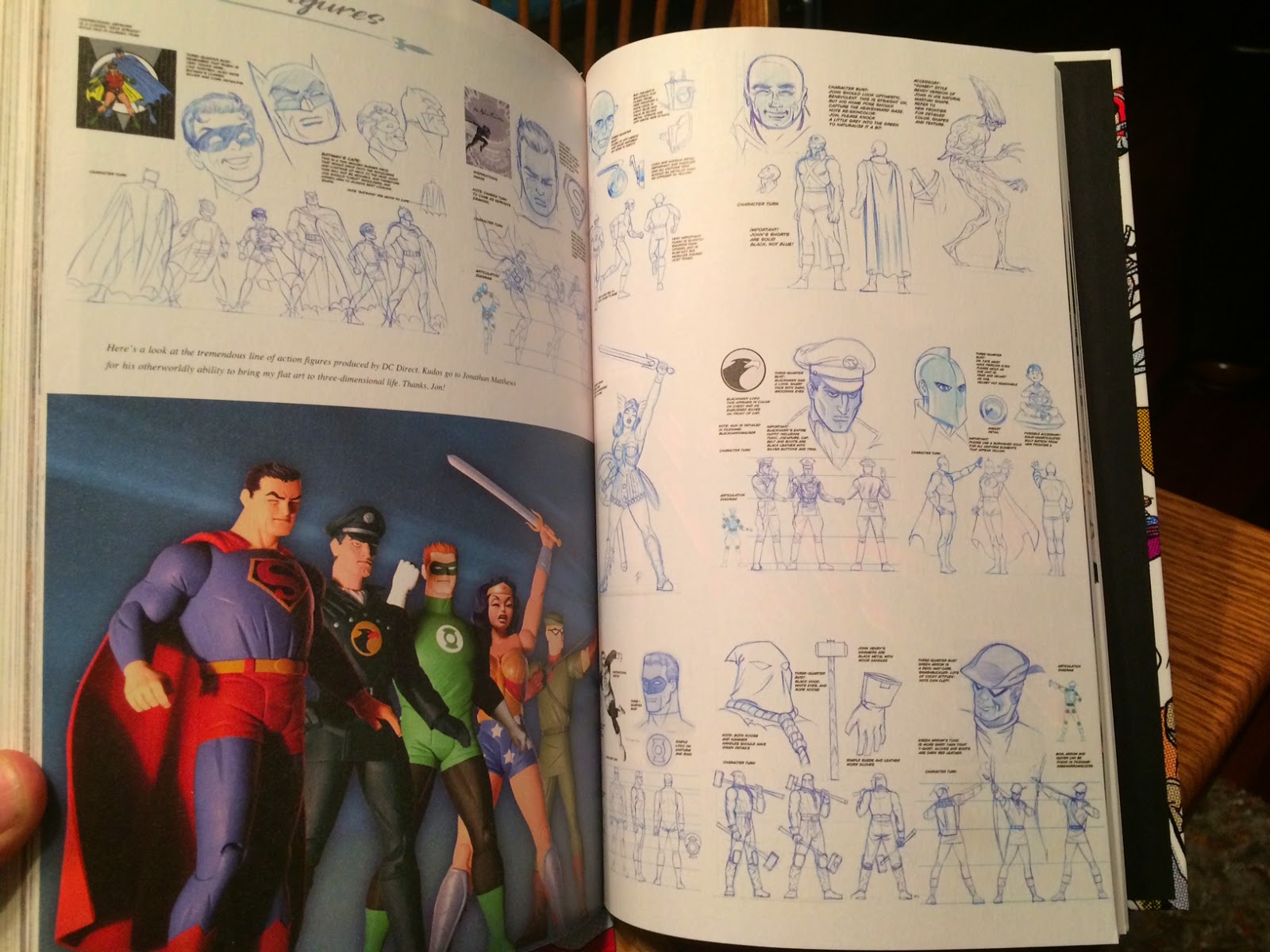 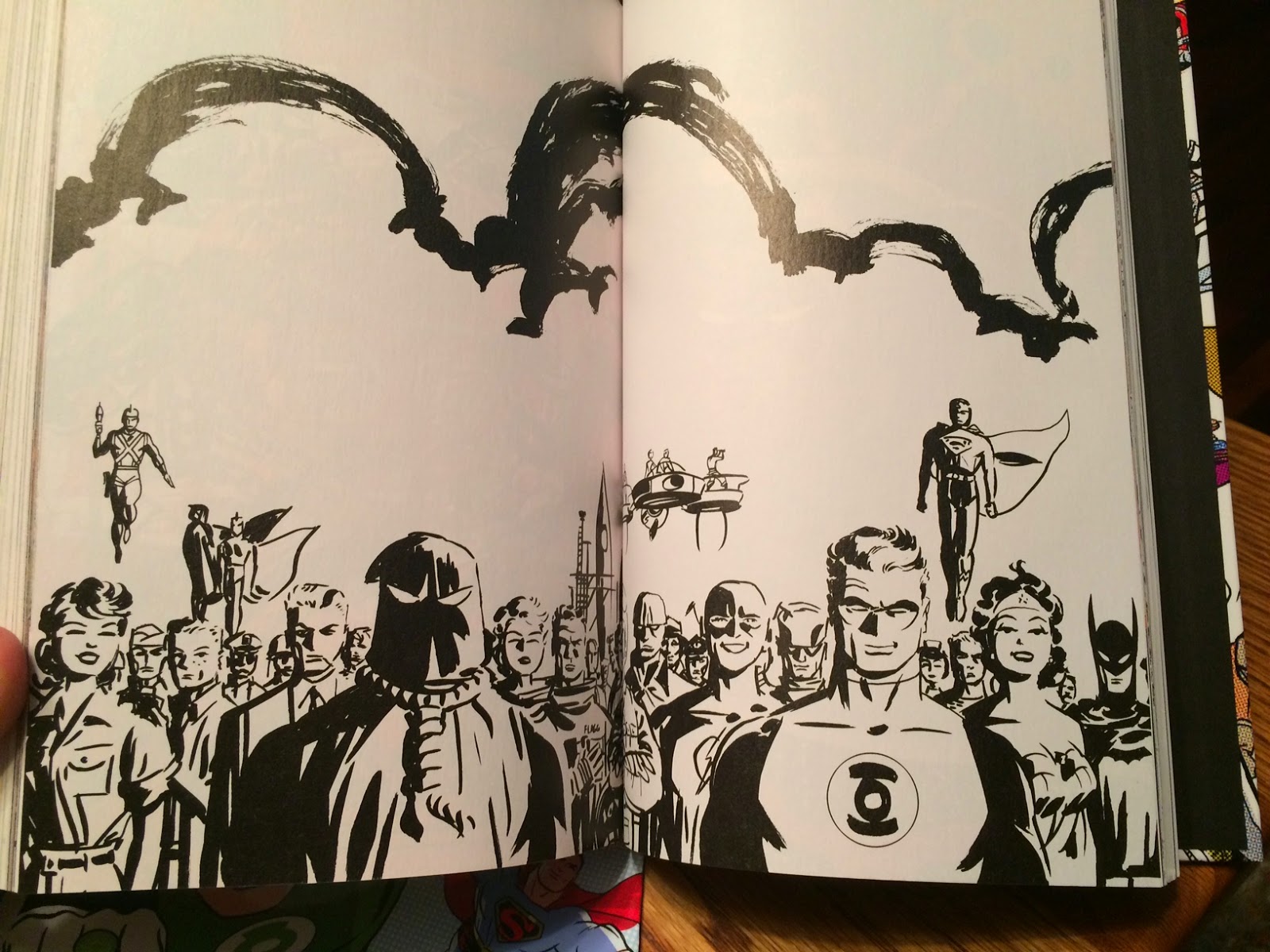 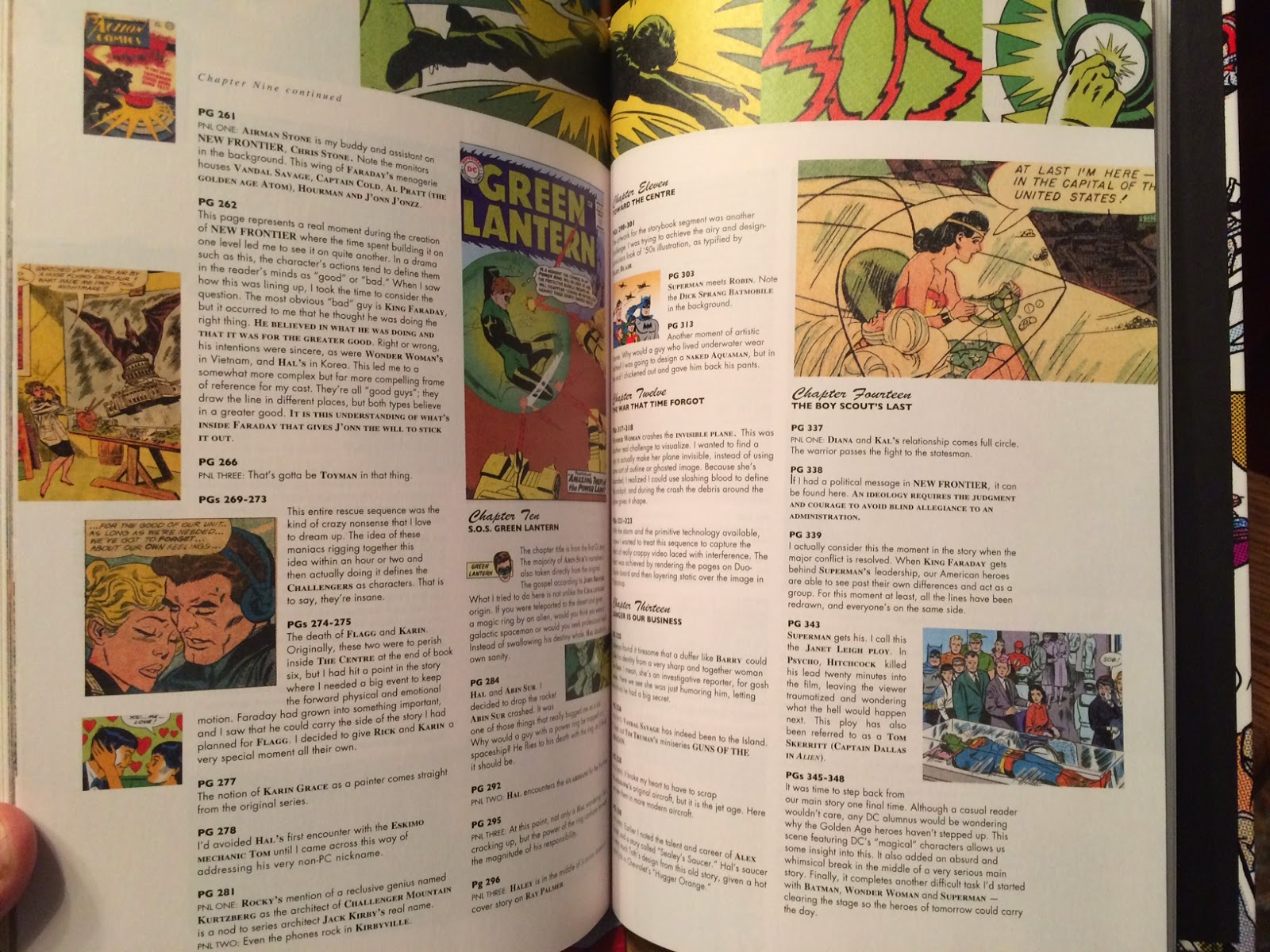 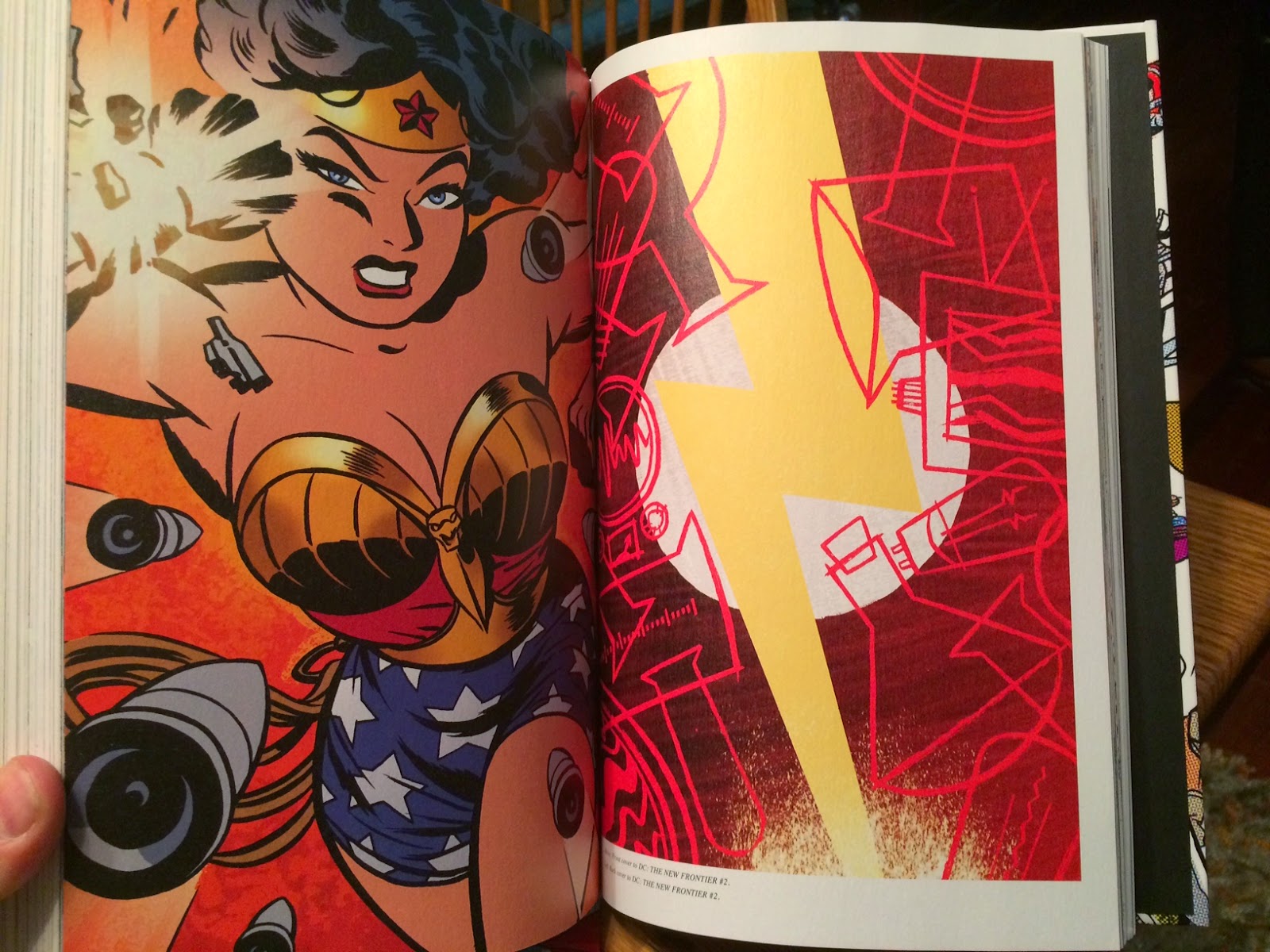 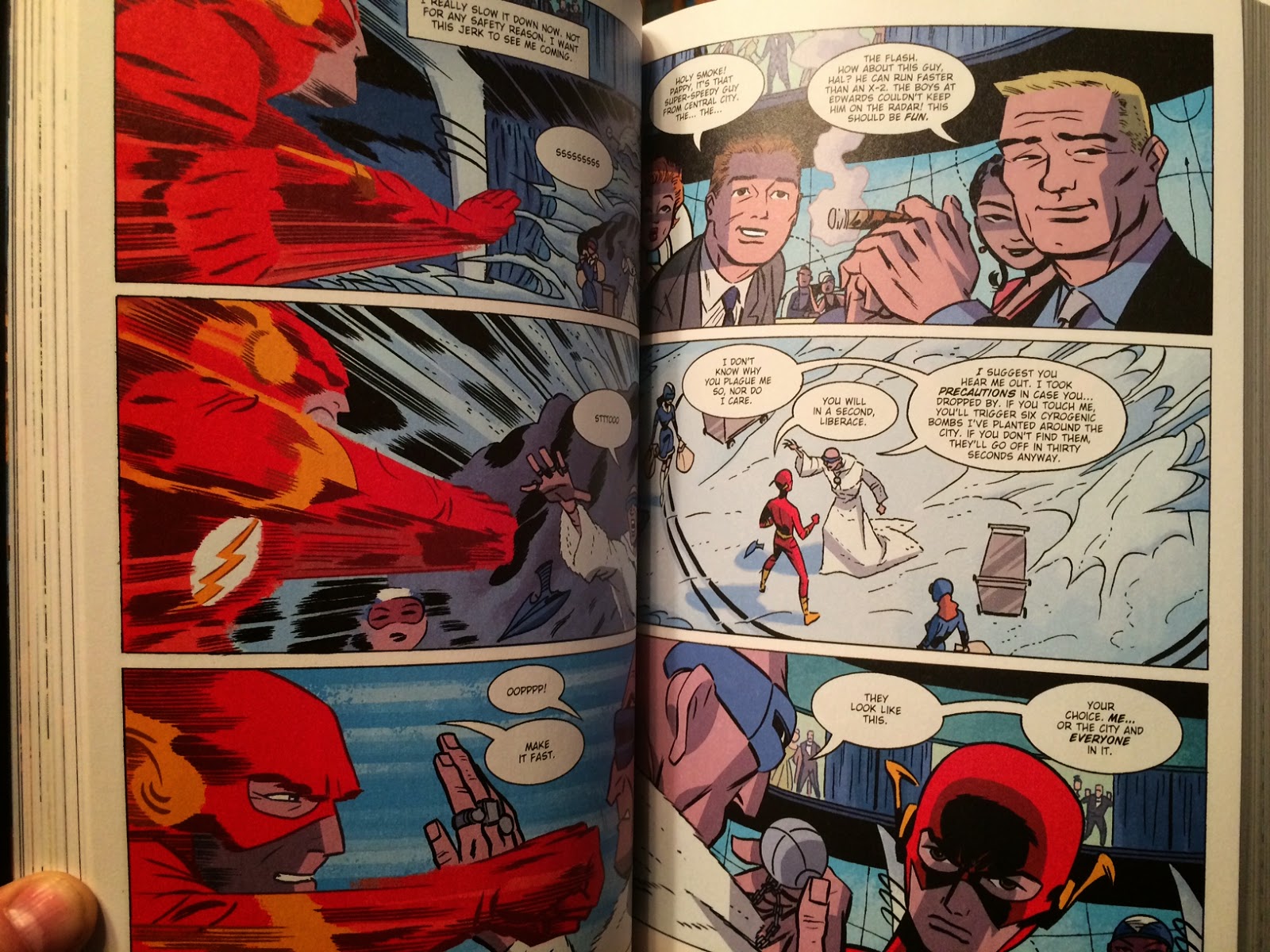 ...and here's that sales pitch part for anyone not already familiar with the New Frontier:

Writer/illustrator Darwyn Cooke's critically acclaimed masterpiece DC: THE NEW FRONTIER is celebrated in this new edition featuring story pages, detailed annotations, alternate sequences and an extensive gallery of sketches, pinups, action figure art and much more! In the 1950s, Cold War paranoia has resulted in the mystery men of the Golden Age being outlaws. Stalwarts such as Batman, Superman and Wonder Woman continued to fight for truth and justice, but as the world hurtles toward an uncertain future, it would take a new breed of hero to define the American Way. DC: THE NEW FRONTIER takes readers on an epic journey from the end of the Golden Age of heroes to the beginnings of the legendary Justice League of America.

For the first time, DC collects the entire epic DC: THE NEW FRONTIER in a single collection, along with sketch and background material from the absolute edition.

REVENGEANCE is a psychological thriller with darkly humorous overtones. When Joe Malarky is faced with a criminal tragedy, he sets out to make things right on his own. What follows is Joe's odyssey through the underside of the city and the madness that seems to drive his crazy world. REVENGEANCE takes place in Toronto in the mid-eighties and is part crime story, part psychotronic melodrama, and a wholly fond look back at the author's hometown.