The column, aptly named "Comics should be good!, represents Darwyn's "secret origin" story from his issue of "solo" here.

Jason Arnold sent along this piece to help promote the Parker books.... 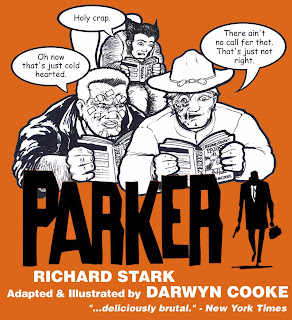 Thanks, Jason! He adds, "My goal is to get a few 'mainstream' comic fans that normally wouldn't check out something like Parker, to at least pick it up and have a flip through it." Jason is also involved in the Where Monster Dwell radio show that can be heard via the interwebs here.

Speaking of radio, well, audio at least....if you didn't get to FanExpo in Toronto last weekend you can listen in on the Darwyn Cooke spotlight thanks to the internet archive. Check it out here or listen right now (if this embedding works)...

I have a great big box full of signed Parker books and art books for the those who entered the Draw Parker contest and will be mailing them out over the next couple of weeks. They will be trackable and I will send the respective folks the info as soon as they hit the post. Thanks again for all the great illustrations that were submitted. If you haven't seen them all, take a few minutes and go through the June and July archives.....I'll wait......pretty sweet, eh?

and finally in news...Eclipse magazine gave a thumbs up to Darwyn's interpretation of The Hunter here.

see you all later!
-calum
Posted by Calum Johnston at 5:47 PM