new Parkers and some convention appearances

First up is Ollie! Take it away, Ollie:
"Hi, my name is Ollie and I live in England, here Is my entry for the Parker contest. I'm a big fan of Darwyn's and I'm looking forward to seeing his adaptation. I don't really know that much about the character, I've only seen the Lee Marvin movie so that's why I decided to go with kind of a movie poster image. Olie doesn't have a blog or anything to plug. As he put it, "I just like to draw every now and then." Well, keep it up!

Next is Anthony Hightower. He writes, "I'm a big fan of Darwyn's work and I'm
anticipating The Hunter like few books in my life. The previews I've seen
are amazing. So when I saw this contest I figured it was a great excuse
for my own Parker painting!" 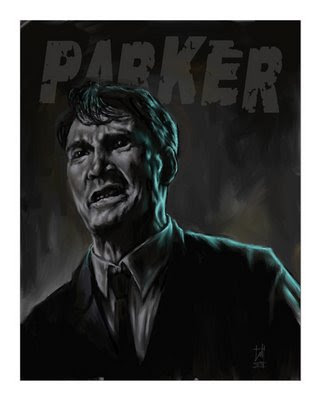 Anthony added, "In case you're interested, I'm a founding member of 803 Studios and I've
drawn three issues of Negative Burn for Desperado as well as the
mini-series, Gutwrencher for Shadowline/Image comics. The newly expanded
trade paperback of Gutwrencher will be out in a few months from IDW. My
website is undergoing a complete revamping at the moment, but some
galleries are up and running in the meantime. Just go to
www.anthonyhightower.com to check them out."

Okay, I will! Thanks, Anthony!

In convention news, from the last couple of posts you should all by now be aware that Darwyn wil be at the San Diego Comic-con taking place July 23-26. He will be signing books at the IDW booth and may appear elsewhere as well. He is not going to have any time to do sketches at this show, but Albert Moy will have some new art for sale.