Parker the Hunter is available on-line for the iPad here and at iVerse comics in this link.

Darwyn and Parker the Hunter were also nominated in several categories of the 2010 Eisner Awards. Best writer/artist, adaptation of another work, and best graphic album (new). The full list of nominees and categories can be seen on the Eisner Award website.

James Sime and the folks at the wonderful Isotope Comics on the west coast held a party during Wondercon called the 100 proof Hex Party. Darwyn, Jimmy Palmiotti and Amanda Conner were in attendance as well as many, many others! Looks like a great time - check out the photos here.

Also from Wondercon, here's a rundown of Darwyn's panel at the show. 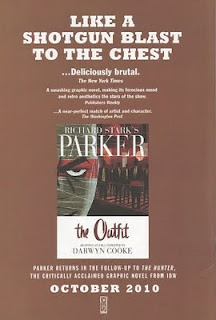 This is from the back cover of "The Man with the Getaway Face", available at select comic-cons this summer and at your local comic book store in July (and for only two bucks!). (image from the folks at The Violent World of Parker)

For those of us that would like to meet Darwyn this year, it would be great if this blog could post his appearance schedule.

I am so ready for the next Parker book. Really can't wait.

Off topic: I just want to say that Darwyn is the greatest. I just listened to the New Frontier commentary and I have never heard a creator compliment and thank his team in such a generous way. You are a class act, Darwyn, and like Flagg, you're all man!